We have acted as design consultants on this large private garden and country estate since 2004.  A former dairy farm, the house was completely re-built and the land turned from productive farming to a biodiversity driven ecological landscape.

The images below show two areas that have undergone a complete re-design and construction from scratch.  The first is a family courtyard which sits on the site of a former farmyard and the second a new kitchen garden.  Elsewhere we have been working on the wider landscape including the design of a large 4 acre lake and biodiversity action plans and implementation for the wider landscape.  Information on the landscape can be found here.

The image below shows the courtyard area following demolition of the existing farmyard and house. The main issues were to find an aesthetic that built upon the proposed architecture and the Dorset locality.  The courtyard has a formal layout based around two key axis.  The main axis runs through the house, across the courtyard, through the western range of building and into the walled garden where it becomes a rill (see walled garden images).  This device unifies the two spaces.

The courtyard is constructed almost entirely from a single material: Ham stone.  It its fine sawn state it is used to make copings and steps, as rubble for the walls, and crushed to make the surfaces.  This simple device created a beautuiful simple composition. 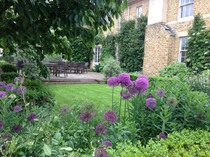 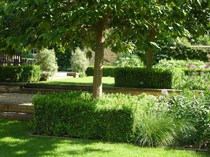 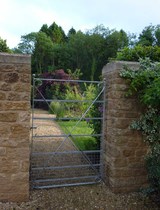 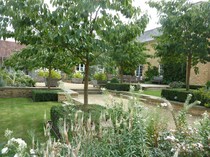 Read our reviews on Houzz